My Day at the White Plains Public Library

I spent yesterday at the White Plains Multicultural Book Festival. Let me tell you, the White Plains Public Library knows how to throw a fest! Plus, it is a gorgeous library. This is what you see as you walk into the children's area: 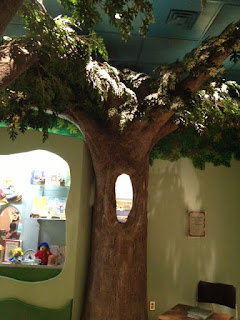 How beautiful is that? There were also tiny points of light on the ceiling made to look like stars.

Inside, there were comfy reading spaces that made me want to settle in and read. It really is an awesome place. There was a whole lot more to see but it was crowded and I didn't want to seem creepy snapping pictures of strangers and stuff.

I was honored to be a part of this festival. I think it is so important for children of all colors to see themselves inside a book. At one point in particular, I witnessed something pretty great. It was a moment that should have been captured in a photo really, but yeah, there's that creepy factor again. What I saw was an African American family consisting of three small boys standing at a table looking through books featuring Barack Obama. At that moment, I was hit with a warm fuzzy feeling. Those three boys are now able to "see" themselves as the President of the United States! We have come so far and no matter where you stand politically, I hope you have a warm fuzzy feeling too.
Posted by Unknown at 5:19 PM

Purchase The Trouble with Half a Moon and Saving Baby Doe at these places: