I got full Jacket!

I'm busy revising my second book but I wanted to take a minute and post my full jacket. Isn't it gorgeous?! When I was a kid, gorgeous was my favorite word. Nothing was just okay or plain old pretty. No, it was gorgeous! Just ask my oldest friend, Renee. GORGEOUS!
Posted by Unknown at 6:26 PM 5 comments:

My younger daughter is turning sixteen next week and unlike her older sister, she decided she’d rather go to Disney than have a Sweet Sixteen party. Okay. Cool. We went. Besides me passing out for the first time in my life (dehydration even though it was evening-- no sun) and having a reoccurrence of “Alien Face” (mainly just my right eye), we had a great time. We only had two days of crazy, sweat pouring down your back kind of heat and the lines were not bad at all! Most said waiting time was five minutes but they lied. We went right in. My favorite rides were Soarin' and the new Harry Potter ride at Universal. AWESOME! My daughter wore a tiara and birthday pin the whole trip and was sung to at every restaurant we ate in. She had a whole week of Birthday! What’s better than that, my friends?


We met up with an old friend who moved out to Orlando years ago. It was so good to see him even though the last time we met, we were so much younger! A couple of days later, a man named Dave from Fort Worth Texas approached my husband and I as we stood in line to pay for a pizza (um, yeah. I was desperate, okay?! I needed a pizza fix, ANY kind of pizza! Don’t’ be sitting there judging me!) and asked if we’d mind him paying for our meal!

He went on to explain he had the Disney meal plan and was leaving and had some meals left and he couldn’t exchange them for cash so, would we mind?

We laughed a little then tried to say no but he insisted and was so nice (we knew we liked Texans, no offense to the other states of course. I mean, he bought me a PIZZA. Helloooo?) and had a great smile.

We all shook hands and spoke a bit. Dear Dave lives in Fort Worth Texas, as I’ve mentioned, lives on ten acres of land in a Victorian house HE built. *Sigh* Whadda guy. Almost makes me cry.

Can you spot the cover for THE TROUBLE WITH HALF A MOON? 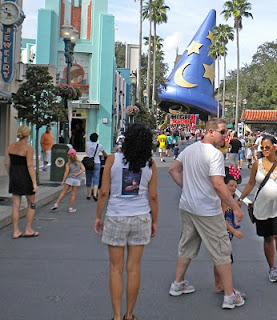 It's a little hard to see but, yes! I was wearing a tank with the cover on it! I made up a couple of them on Cafepress.com and I love them. I put the image on the back because I thought people might feel more comfortable checking out (and taking their time) my back rather than, ya know, my front. I also made sure I wore one in the airports. I'll make up a couple of hoodies for the fall. I'll have to think of something for winter. Maybe a sandwich board! I kidd, I kidd.
Posted by Unknown at 10:57 PM 3 comments:

Purchase The Trouble with Half a Moon and Saving Baby Doe at these places: